What better way to start a new year than with an invigorating mountain bike ride in the Brecon Beacons? Probably pretty fun every other time of the year too!

We hired bikes from Wild Rides, collecting them from Drover Cycles in Hay. We are keen road cyclists but not regular mountain bikers, so our skills were somewhat rusty. Please note this route can be done by anyone but only if willing to push down, and up, in places!

The Route:
This route starts with a lot of up. Up up up on the road for about 8km from Hay to Hay Bluff. At the Gospel Pass car park you turn off road and have to push up for about 1km (even the most hardy will push!). This would have been quite pleasant for us had it not been blowing a howling gale. But the views all around the Bluff are magnificent so it was hard to complain up there. As you near Hay Bluff‘s summit you can hop on and start to get your MTB legs going!

We veered south-east at the trig point and suddenly found ourselves in a blissful wind-less silence where we could hear our tyres gripping the great terrain. The stretch from Hay Bluff trig to the Black Hill trig is generally wide and flat, with no drops on either side, just fields of heather and peaty bogs to fall into should you come a cropper. We stopped at the intersection with Offa’s Dyke path, for quick snack break and to direct some lost Americans (“Could you show me the path back to my car?” !).

A few km onwards, now slightly around the east side of the Black Hill, the track got a little trickier – bumpier and lumpier. We kept our eyes peeled for the bridle path to take us down into the Olchon Valley. We found the path marked with a little pile of stones, but nerves got the better of us. On the map it looked like a very steep descent, and time was ticking on so we past the mini cairn, swearing we’d return to tackle that descent another day. We were into the deafening wind again and the Black Hill ridge started to get a bit more downward-seeming. We were all familiar with walking the Black Hill and decided the ‘Diagonal Path’ off it was preferable to the Cat’s Back descent. (The Cat’s Back gets very narrow and rocky with drops to the side). The Diagonal was unridable at the top – too steep/narrow/muddy – but we hopped on about half way down for a rip-roaring plummet to the gate.

We opted for the road to the Bulls Head pub, knowing that the drovers track alternative is mud bath at the best of times. The pub was shut for its winter break (it was Jan 2nd) so we pumped on round to the tiny Craswall Church. Just past the church entrance there is a farm drive that leads to a bridle path. This path takes you through muddy, boggy fields, lots of gates, and over a stream or two so it was a hard slog, but it kept us off the road and had us thoroughly exhausted by the time we popped out on the road, 6km from Hay – and all downhill. 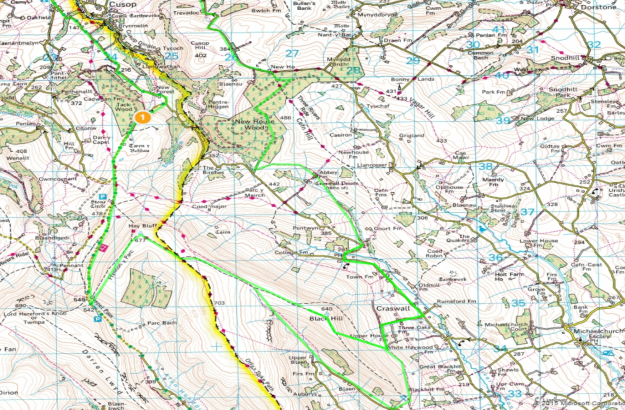 The green line follows are plans. Please do take a proper map with you!!

We underestimated how long the route would take, so we missed out the last section I had planned to take us through New House Wood and back to Hay on a different road. The next day we hiked through this forest and all agreed the wide gravely tracks would have been perfect on a bike.

Granary Cottage is a great base for both for mountain bikers and for roadies. Last weekend Sam and I took to the roads for a bit of an explore. On recent visits we have stuck to our old faithful route, the “Llanthony Lap” but this time we thought it was time to venture further afield. Dorstone’s location near the Brecons but not actually in them does give us the best of both worlds – you can choose to go for the big climbs or you can choose the kinder rolly ones and just enjoy the great views of the Brecons. Having said that, those ‘rolly’ ones can still pack a punch – there’s a 25%’er out of Dorstone to Arthur’s Stone! 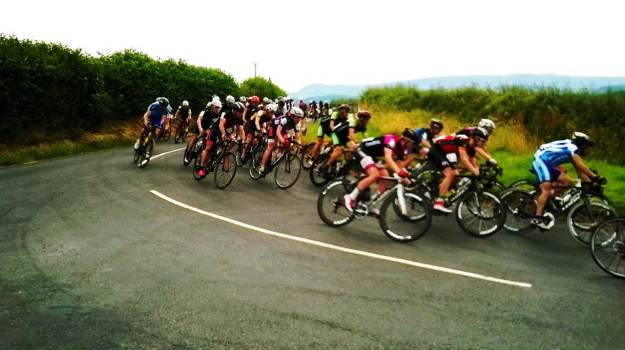 See the links below for our routes (and I’ve included the Llanthony Lap too).

The Back and Beyond of Hay on Wye http://ridewithgps.com/routes/5459956
60km, 650m of climbing. Some good long flats on decent surface. Great views of the Brecons. Great river crossings.

Herefordshire Rollies http://ridewithgps.com/routes/5297737
58km, 850m of climbing. Some steep sections! Whitney Toll Bridge is 10p for cyclists to cross – we genuinely didn’t know and cycled on through, no one chased us!

The Llanthony Lap http://ridewithgps.com/routes/5218761
70km, 1000m of climbing
This is an awesome route either way around. Llanthony Priory is a must-see and has a great little pub in the old cellar – check opening times before you go.

While out in the wonderful isolation of the Powys/Herefordshire countryside, it’s still good to know where you can stop for refreshment. I haven’t tried and tested all these places but they were all open and looking lively when we past them (July 2014):

A few snaps from our rides: 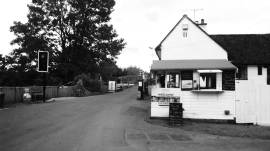 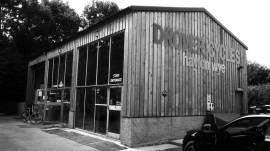 Saved the day with a mechanical issue! 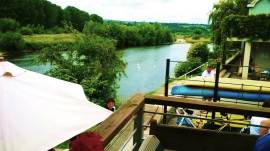 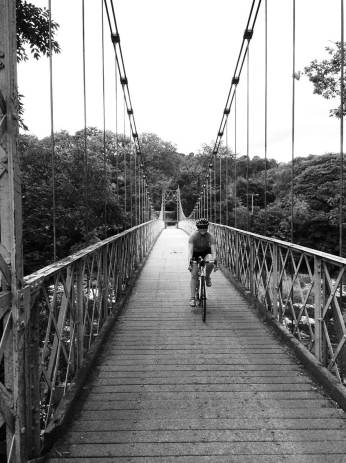 The alarm clock failing, I was awoken last Sunday by the sound of rain lashing on the window and wind howling round the Granary garden. What a lovely day for a cycle round the Brecons I thought!

We had signed up for the inaugural Hay-on-Wye Sportive and had come up to the Granary especially for it, so there was no ducking out now. Furthermore, we had eaten a significant amount of cake the day before, in preparation, so we had some calories to burn!

Turning up at Drover Cycles, we found a good number of cyclists, all trying to smile at the weather ‘situation’. We signed in, layered up and got on our way. (See the route map here.) Doing the 65 mile route, turning left out of Drovers, the first section was up, up, up. At the first junction a gaggle of hefty white geese had aligned themselves to guide us the right way by threatening to peck our legs. I was glad to have my full length lycras on!

The road from Hay up to Craswall is a tough climb, but there are some rolly bits where your legs get a few seconds respite. Nearing the highest point, the road becomes free of hedges and the view of the Black Hill is brilliant. It is however very exposed – metres from the final crest, I was blown clean over! Just a little graze but my pride was somewhat hurt!

Onwards and, now, downwards. We enjoyed the cruise through Craswall, Longtown, and Michaelchurch, stopping at Vowchurch where some very friendly sportive helpers greeted us with tea and flapjacks in the village hall.

After the Vowchurch stop was a decision point – turn back to the cottage or continue on the route. Feeling re-fuelled, and now out of the wind, we continued. Through Abbey Dore, Kentchurch, Skenfrith, the route rolled on past some great buildings – manor houses, castles and country cottages. Mental note to come back this way again on a more leisurely cycle – there were a couple of potential coffee-stop places.

Passing the half-way point, we plugged on to Pandy, crossing the A465 (there’s a central section on the road so it’s easy to cross on a bike), and the Black Mountains were again in view. We knew we had to head right into them! Feed Station No. 2 awaited us at Cwmyoy – this time coffee and more flapjacks.

We past Llanthony Priory and pushed on to Capel-y-Ffin. Although I was somewhat suffering by this point, the wonder of the Llanthony Valley pulled me through. I have been in the valley countless times, on horse, bike and foot and never tire of it. The route took a final burst up the Gospel Pass and we rounded the corner of Hay Bluff, revealing a rather bleak but still magnificent view of the Wye Valley below. We had made it! Although still 5 or so miles from the finish line, we knew it was down, down, down to Hay from here.

All in all it was a great ride. A super route, well organised – and fantastic flapjacks!

If you’re interested in the preparation… “Carb-loading” started on Friday night – we made it to Dorstone just in time for a Caribbean bread and butter pudding at the Pandy Inn. Absolutely divine. We spent Saturday in Hay – great soup and rolls and milkshakes at Oscar’s Bistro – then a mooch round the bookshops and antique emporiums before coffee, carrot cake and tiffin in Tomatitos – a great find. Dinner at home in the Granary then off to the Pandy again for pud – this time sticky toffee pudding….

I didn’t manage to get the camera once on the ride, the weather being so awful. I did get a few of our day in Hay, and Tomatitos carrot cake: 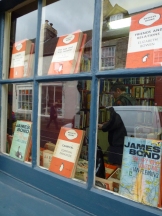 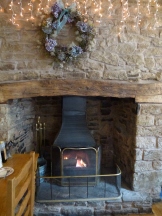 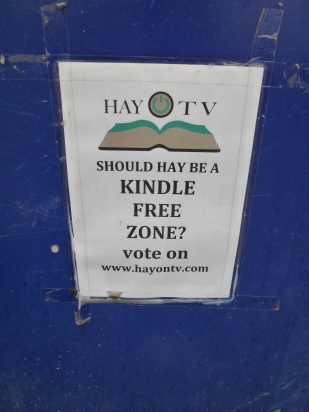 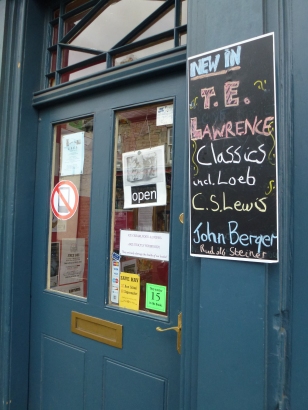 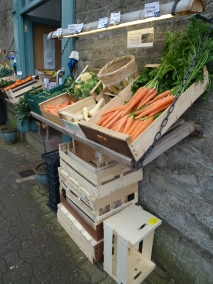 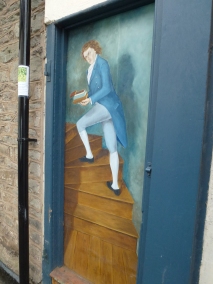 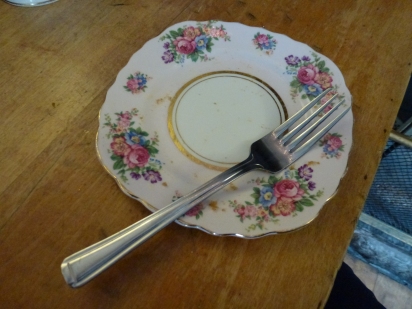 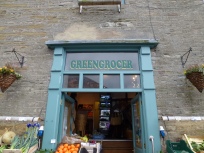 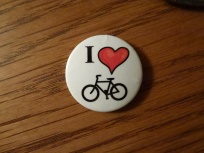